The wood thrush is medium-sized bird native to North America. It is a close relative of the American Robin and the other thrushes. 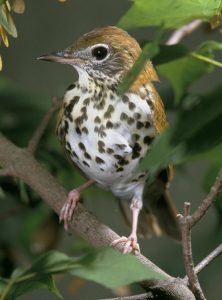 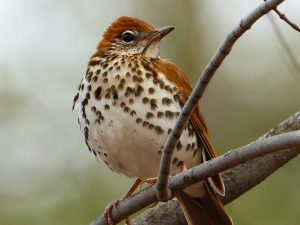 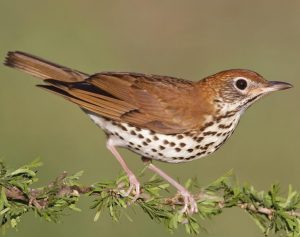 These birds are known to be solitary, however, during winters they may form flocks with other bird species. Some individuals tend to defend their feeding zones. Territorial disputes are mostly settled without physical clashes, but while defending their nests, they resort to aggressive physical contact with their feet and bill. They also opt for other defensive action like wing flicks, tail flicks, raising the crest along with extreme measures like dives and strikes against predators like brown-headed cowbirds, southern flying squirrels, black rat snakes.

A peculiar behavior of “anting” is seen in these birds where they pick the ants and rub them on the wings. The reason behind it is still unclear however it is assumed that the birds acquire some medicinal utility through it or as a supplement of bird’s own preen oil. 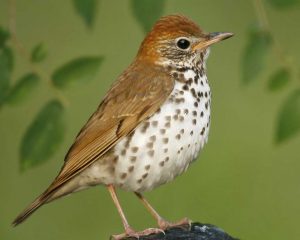 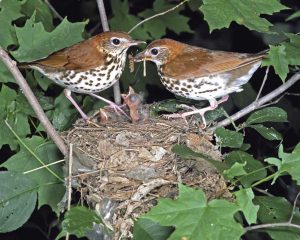 These birds are monogamous by nature. They begin nesting by the end of spring or early summer by choosing a vast breeding area, which is used for feeding and accumulating materials for nesting. The females usually choose the nesting site, but at times the male convinces her in site selection by perching nearby and singing.

They prefer tall trees that have an understory of saplings, shrubs with an open floor of moist soil, decaying leaves and nearby water source. Pale blue or bluish-green eggs are laid in a cup nest made out of mud, moss, dried leaves bordered by fine twigs or roots. 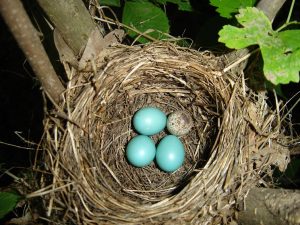 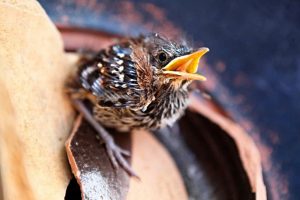 The female lays one egg per day till it reaches the clutch size of 2-4 eggs. When the chicks hatch, their body is totally featherless and eyes closed. Post-hatching, the brooding is done by the female for the first four days. Males and females together feed the chicks as well as clean the nest. The chicks fledge after 12-15 days, but the parents feed them until they become entirely independent. The chicks leave the parents territory after a period of 21-31 days.

The population of the wood thrush is declining at an alarming rate, and threats like habitat loss, excessive nest predation and cowbird parasitism due to fragmentation of forest are key responsible factors.

© 2021 (Coniferous Forest). All rights reserved. Reproduction in whole or in part without permission is prohibited.