The white-breasted nuthatch belongs to the nuthatch family that includes a number of small songbirds. It is found throughout the temperate regions of North America and breeds in the woodlands that are full of old trees.

This bird is endowed with a stocky body consisting of a big head, strong beak, small tail and powerful feet. It has a white face and has a light blue-gray hue on the upper parts of its body. Its ventral side is also white, the top of its head is black and the lower belly is tinged with a chestnut shade.

This avian species is very agile and energetic with a penchant for insects and big, fleshy seeds. They have a unique and interesting habit of lodging large acorns and various kinds of nuts into the barks of trees.

Once this is done, they pound the nuts so hard with their sharp beaks that the seed comes out from within. This process resembles the “hatching out” of the large seeds giving these songbirds the “nuthatch” appellation. 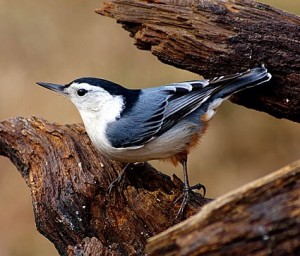 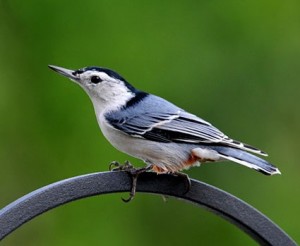 The white-breasted nuthatch is distinctive as it can move down tree trunks with its head going first and also has the additional ability to hang upside down below twigs and branches. They do this without using their tails and hop through the trees using their nimble legs.

This helps them uncover insects that remain hidden in the cracks of the trees and barks. They prefer hopping as opposed to walking when they are searching for food on the ground. They sweep the entrances of their nests with plants, insects or fur using their beaks. This is probably done to fool predators who can recognize their scents.

Nuthatches defend their territories throughout the year as they are not migratory birds. The territories that are wooded are usually smaller than those that are non-wooded. Each pair lives in a fixed location where both the sexes cohabit under the dominance of the male. These birds may leave their territories in winter and visit bird feeders during these times of scarcity.

During winter, nuthatches and downy woodpeckers often join mixed flocks of birds with titmice and chickadees as their leaders. They engage in this behavior as they can locate food easily and avoid predators with the additional benefit of reducing their vigilance by intercepting and decoding the calls of chickadees. 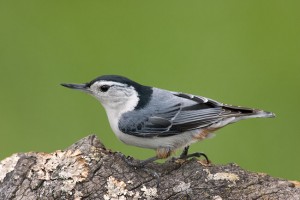 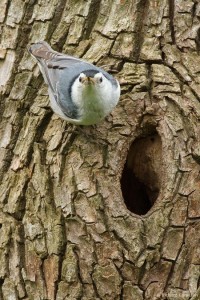 White-breasted nuthatches have monogamous mating habits and form pairs that bond together for years until death or disappearance separates them. During the breeding season, the male performs its courtship dance that consists of singing and bowing to the female. It also spreads its tail and sways to and fro with drooping wings accompanied by bringing food for the female. 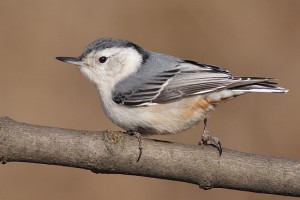 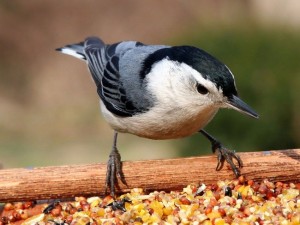 The majority of white-breasted nuthatches breed from May to June with occasional divergences that extend the breeding season from April to July. The females build the nests alone and raise only a single brood in a year. The nests are built in cavities that may be holes in decaying trees that are situated at a height of 3 to 18 meters; it may even be an old woodpecker nest. The nests are generally covered with soft grass, fur, and fine pieces of bark. 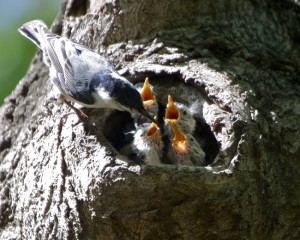 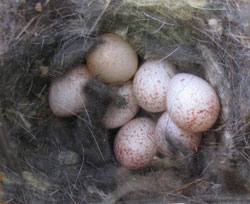 Once the nest building process is over, the female lays around 6 to 8 pinkish eggs with speckles and incubates them for about 12 to 14 days with the male bringing food for her during this time frame.

The chicks that are born are altricial, and they fledge within 18 to 26 days. Both the parents feed the immature birds for about two weeks post-fledging after which they become independent. These juveniles become ready to breed in the spring of the following year.

At this stage, they may demarcate their own territories or turn into “floaters”, the term used to designate juvenile birds without mates and territories. These floaters are, in fact, responsible for the irregular dispersal of these birds. Generally these birds roost alone except during very cold winters when they may roost in groups. 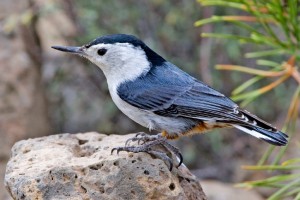 The white-breasted nuthatch has superior muscle strength that gives it the ability to break large nuts into smaller pieces. Their long hind toes resemble claws and help them to move upside down from tree trunks and branches. Their short tails help them move down tree trunks with relative ease as compared to woodpeckers that are not able to do this as they have longer tails. This helps nuthatches to catch those insects that are generally overlooked by other birds. 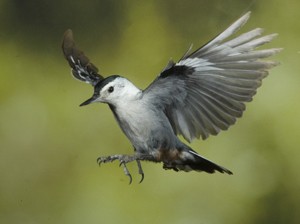 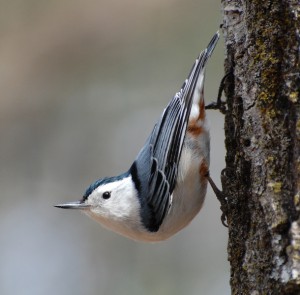