The great grey owl is recorded as one of the largest species of owls in the world, found in coniferous forests and mountainous regions in the Northern Hemisphere. These birds are endowed with a large round head and a grey face with yellow eyes encircled with dark circles. The grey feathers all over its body have given this bird its name.

Its fluffy feathers make it look very large, earning the owl its name. Even though it has a large wingspan of up to 60 inches, it is only half as heavy as a snowy owl. Adult owls have a voracious appetite for rodents and can eat large quantities of food measuring around one third of their actual body weight each day. 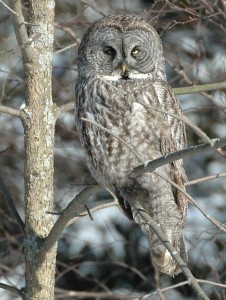 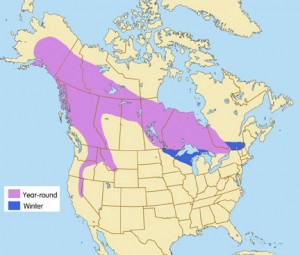 Great Grey Owls are mostly nocturnal but are sometimes active at dusk and dawn as well. These birds hunt at daytime during their breeding season.

They stay put in a particular area and have a very patient hunting style that involves sitting and waiting on a perch until some unsuspecting prey comes within its vicinity. They also have the ability to fly low while scanning the entire area for small mammals.

They are capable of breaking through the frosty snow to catch rodents that remain hidden under the deeper layers. If there is a concentration of prey in a particular location during winter, then these birds form loose groups among themselves. 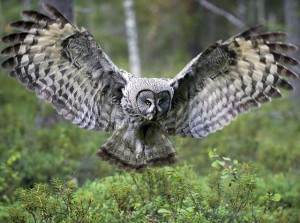 The courtship rituals begin in the middle of winter and include feeding and preening each other. Usually, the male brings food for the female and they close their eyes as it is passed on to the female’s beak. The male also tries attracting the female with calls in front of the nest site that it has selected. The female inspects the nest for several rounds before selecting the one that it likes the most. 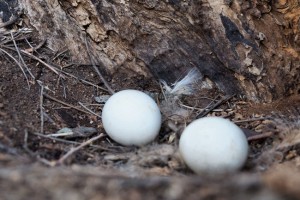 These large birds use abandoned old nests of crows, ravens and hawks, often on hollow branches and in mistletoe clumps, in close proximity to a meadow or large clearing. The nests may be located on the ground in some European countries. They commonly use Northern Goshawks nests for rearing their chicks.

They are different from other owl species in the fact that they tidy and improvise the existing nest. The birds line the nests with deer hair, shredded bark, moss and conifer needles. Once the nest building process is over, the female lays two to five eggs with an average of three eggs and each egg is separated by one or two days. 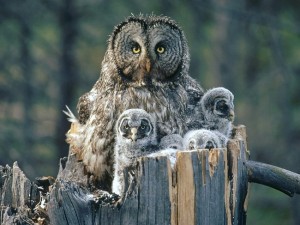 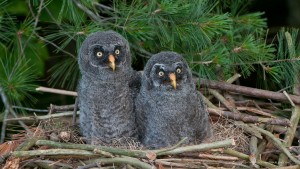 As soon as the first egg is laid, the female starts incubating the eggs for a period of 28 to 29 days. The males have the function of providing food whereas the females incubate the eggs, and after hatching, look after the babies. The female tears the food into small bits and pieces before offering it to the young birds.

The juvenile birds begin climbing at 3 to 4 weeks, beginning to move out of the nest. They fledge at the age of around 8 weeks but live in the vicinity of the nest with the adult birds taking care of them. Great grey owl females do not provide for their young after they have fledged. The rest of the juvenile care is provided by the males who look after their offspring for several months.

The juveniles become ready for breeding between one to three years of age. These owls generally have only one brood per season but will replace lost clutches by laying more eggs. Both parents are very aggressive in defending their nests and have the ability to scare off large animals like black bears if they come to prey on their babies. 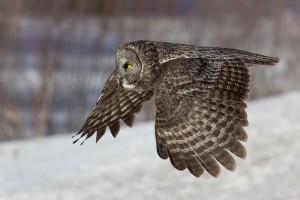 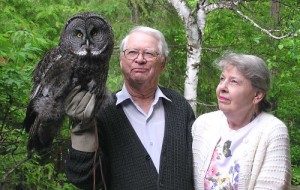 Their large size is a protective adaptation that helps it fool predators who will hesitate to attack such a large bird. The large facial disks are also an adaptation and consist of feathers surrounding their head that help in directing outside sounds to their ears. The owls have the ability to keep these feathers raised while hunting that make it easy for them to decipher the exact location of their prey and go in for the kill. 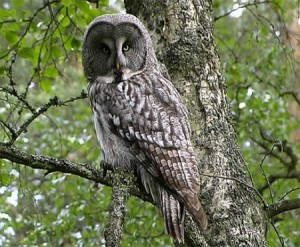 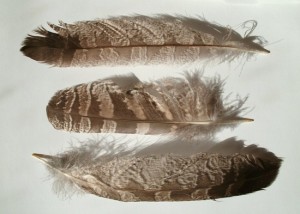