The American marten is a North American mammal of the weasel family. This predator is also known as the “pine marten”; this name is derived from the common but distinctive martens that are found all over Eurasia. It is smaller and has a lighter color than the fisher (Martes Pennanti).

This small animal has golden brown fur with a yellow chest. It has a long and slender body with large eyes. Their small rounded ears resemble those of cats and they also have sharp, curved claws. 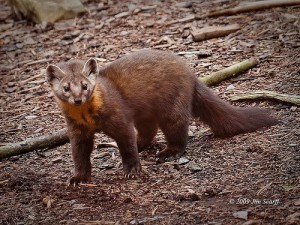 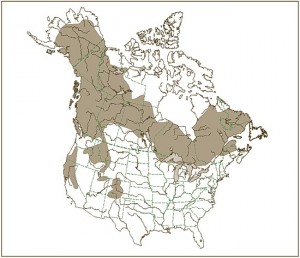 The American marten is generally solitary and nocturnal. They are sometimes spotted in pairs as well as with dependent young. Though these animals are arboreal and spend most of their time on trees, still they do most of their hunting on the ground.

These mammals hunt during dusk and dawn when their prey is readily available. They are good swimmers and have the ability to swim under water as well. They do not hibernate and are active during winter.

American martens have a home range that is related to their sex, geographic area, cover type, habitat fragmentation, resident status, population density, year, prey availability, quality reproductive status and predation; however, it is most probably not related to their physical dimensions. Generally the males have a larger home range than the females and this may be attributed to the fact that females have denning needs that restrict their home range. 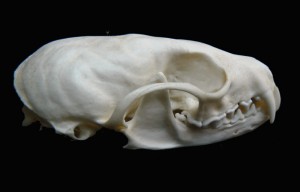 Martens are polygynous, with the male mating with multiple females in the course of a breeding season. The male defends his territory against other male intrusions. Females enter estrus at around July or August, making scent markings in the males’ territories in order to alert them that they are prepared for breeding.Their courtship lasts for about 15 days and the pair often wrestles and plays together before mating. 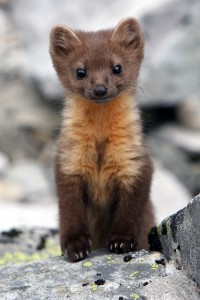 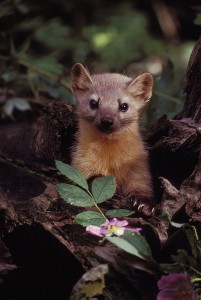 Even though the marten breeding season is from June to August, the young ones are born only towards the end of March or the beginning of April. These mammals have an unusual kind of pregnancy with delayed implantation of the fertilized eggs. This means that the eggs  do not attach themselves to the uterine wall right away even though they are fertilized immediately. Once the development begins, the fertilized eggs undergo a gestation of around four weeks and the young ones (kits) are born sometime in late March or early April. 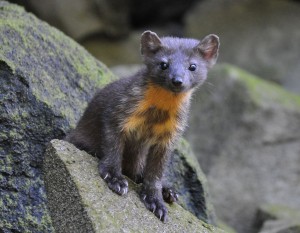 The females make use of dens to give birth and provide shelter to their babies. There are two types of dens-parturition occurs in natal dens whereas females shift their kits to maternal dens after giving birth. The females mainly use branches, snags, logs, stumps, witch’s brooms and wooden debris to build their dens. They line it with moss, leaves and grass to make it soft. When the kits reach 7-13 weeks of age, they are shifted by their mother frequently to new maternal dens.

The young ones of the American marten gain eyesight at the age of 39 days and they survive only on their mother’s milk till they are weaned at 42 days. They generally come out of their dens at 50 days. They become active at 7 to 8 weeks; however, they gain coordination at 12 to 15 weeks and reach adult weight at around three months. The juveniles stay with their mother all through the summer after which a majority of them disperse during the fall. This period coincides with the onset of the female’s estrus and their mother will prepare herself for her next breeding cycle. The dispersed juveniles will be ready for breeding when they become a year and a half to two years old. 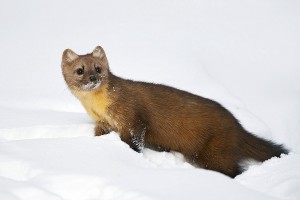 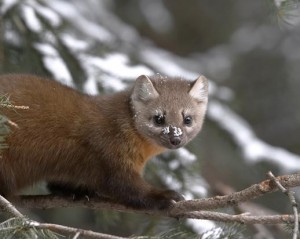